Here on the Purdue campus, it’s getting to the end of the first week of classes.  After a summer of languid quiet, there are now tens of thousands of folks that weren’t here just a few days previously.  There are new schedules and new constraints: fewer construction barrels and more busses, but more requirements to be someplace for a meeting that starts right at that time.  Yes, the shifts associated with an academic lifestyle.
We also have some welcoming to do for three new affiliates: Anderson University, Children’s Museum of Indianapolis, and Evansville Museum.  You probably know something about them, but here’s a little bit more about how they work within our Consortium:
Anderson University is a private university located in Anderson, IN, between Indianapolis and Muncie.  They have a strong program in Astronomy, and in fact will be hosting the next meeting of the Indiana Astronomy network of student and faculty researchers.  In terms of size (a bit over 2000 students), history, and mix, Anderson is more like our existing affiliates at Evansville, Taylor, and Valparaiso: competitive, highly regarded, undergraduate focused institutions with a strong religious tradition.  We are looking forward to their increasing participation in the astronomy network and their engagement of undergraduates in research in the physical sciences.
Children’s Museum of Indianapolis is located near the famous Meridian-Kessler neighborhood of Indianapolis.  They are internationally known as the largest children’s museum in the world, and one of the nation’s top museum tourist attractions  (not just children’s museums, but all museums).  They have a new NASA exhibit underway on aviation and modeling, and will be a strong partner in our informal education activities.
Evansville Museum is located on the banks of the Ohio River in the City of Evansville, at the southern end of Indiana (if you wade in the Ohio, or travel one mile south, you’re in Kentucky).  They are home to the Koch Planetarium, and have been hosting a featured Outreach to Space exhibit (INSGC has been working with Science Central to bring Outreach to Space to venues across Indiana, including some exhibits at the Indiana State Fair).  If you’re down there, check out the Moon Watch on September 3.
As you can tell, these new affiliates all build on existing partnerships and strengths of INSGC, and represent richness in academic and outreach interactions that I believe is unparalleled in the country.  (According to one presentation, INSGC already has over one third of all outreach affiliates in the national Space Grant network; we are the only state with three Challenger Learning Center affiliates.)  In 2003, we were worried how we would manage on 12 or fewer affiliates; now we’re close to 25, and the major question facing INSGC is how to keep from growing too much.  We have this question because of the success and participation of our affiliates, and an ongoing habit of bold innovations and exciting engagement of NASA materials and experiences.
With all of this hoopla, though, there is one bit of mixed feelings with the coming of this fall.  Ben Weiss, who has been our undergraduate INSGC intern since 2009 (with responsibilities for website, data reporting, longitudinal tracking, Facebook upgrading, and general honesty, integrity, and “what else do you need me to do” approach), has graduated and is moving on.  We just heard a few days ago that Ben has been accepted into the Marine Corps Officer Candidate School, fulfilling a long-term dream.  He promises to buzz the INSGC Central office in a high performance jet the first chance he gets.  Good luck, Ben, and be well.  I for one will miss you tremendously.  INSGC owes you more than we can express.
Posted by Barrett Caldwell, INSGC Director at 1:21 PM No comments: Links to this post

This month, I have gotten to have several enjoyable experiences in naked-eye astronomy, and a reminder of a bit of memory and trivia.  Years ago, there was a program called “Jack Horkheimer, Star Hustler” on PBS, hosted by Jack Horkheimer, Director of the Miami Space Transit Planetarium.  With his distinctive voice and waddle along the rings of Saturn, Jack would talk about the various constellations, displays, and events in the night sky that week.  He would end each show with the happy encouragement to “Keep Looking Up!” Unfortunately, the timing of the broadcast where I was living at the time was such that Star Hustler broadcast was the Saturday night at the end of the week Jack was describing.  Thus, the shows weren’t very useful at all.
Real-time information technology access and electronic search has changed all of that.  (Supposedly, it even changed the name of the show: after the advent of web browser search, the program stem “Star Hustler” was changed to “Star Gazer” so that well-meaning young astronomers would not accidentally begin their search with the pages of an adult magazine.  I will not add any racy or humorous comments here.)    Smart devices and smartphone applications have made tremendous progress in helping the amateur with keeping tabs on what is going on in the skies, and I was able to enjoy and learn about several tools.  One of my favorite iPhone apps is StarWalk, one of the best things on the device (not just my opinion!)  StarWalk allows you to point your iPhone up at the sky, and its accelerometers and GPS sensors will allow you to identify what you’re looking at, and what celestial events are ongoing.  I’ve used StarWalk in South Africa (note my prior blog entry “Under African Skies”) and China.  Late last Friday night (August 12-13), I also managed to find and watch some of the Pleiades meteor shower while I was at a conference in Boise.  (Too bad I didn’t have a car, to go up into the mountains for a much darker sky…)
The NASA App is available on a variety of devices, and I have found this extremely useful as well.   There’s great access to NASA images, NASA TV schedules, and other information about the Space Program (yes, we still have one), but my favorite component this past week was the ISS sighting opportunities.  Sunday night (August 14), the NASA app told me where and when to look for a sighting of the International Space Station from my home in Lafayette, IN.  On a good night (such as last Sunday), the ISS is one of the 3-5 brightest objects in the sky, streaking high overhead much faster than any star or planet, but without the tell-tale blinking lights of an aircraft.  (Please note that NASA has a number of other mobile device apps available; I just haven’t used them.)
Coincidentally, my best friend was also outside, looking up at the same time, happily seeing the same streaking ISS between the clouds.  My friend was using another nice app named (with some unfortunate irony) Space Junk.  Once again, beautiful graphics and “through the device” viewing of the live night sky.  It’s easier to see the orbital tracks of the Hubble, ISS, and a number of satellites, although NASA App is easier to search for future passes over several days.  Either way, your smartphone turns into a delightful tool to learn what is happening in the sky (even below the horizon or on a cloudy night), anywhere in the world, right now.
While I was in Boise last week, I did see a new episode of “Star Gazer”: it had the same picture of Saturn as the background, the same music, and the same encouragement to “keep looking up!”  Jack Horkheimer, though, was not there.  He died almost exactly one year ago, on August 22, 2010.  I don’t think he’d mind that the software now available has made it much easier than his show ever was to follow his advice.
(Did you know that Libra is rising just south of due east, as I finish this blog at 4:45 PM?  The sun is bright this afternoon, but my iPhone can still tell me about the other stars.)
Posted by Barrett Caldwell, INSGC Director at 4:49 PM No comments: Links to this post 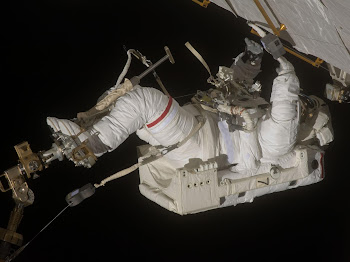